1202 | the publication reaches you by | Bahrain News


The documentation was signed at a ceremony in the presence of other international dignitaries and reporters, an AFP correspondent said, fleshing out a US-brokered deal the two nations had agreed to at the White House on September 15.

The Israeli delegation, led by National Security Council chief Meir Ben Shabbat, had travelled to Manama from Tel Aviv on the first direct flight between the two countries.

But Bahrain’s King Hamad bin Isa Al Khalifa, as well as the crown prince and prime minister, were absent from the ceremony, the AFP correspondent said.

On Sunday, the two nations’ officials agreed to establish peaceful diplomatic relations and cooperate in the fields of the economy, civil aviation, finance, communications and agriculture, Israel’s foreign ministry said in a statement.

It also said it would cooperate with Bahrain’s foreign ministry and noted that the two nations had agreed Sunday on the exemption of visa requirements for diplomats.

Bahrain’s foreign minister, Abdullatif al-Zayani, said that the decision to normalise ties comes from the “belief in the values of tolerance… in a region whose people have suffered from wars and conflicts”.

The two sides will be free to open embassies in each other’s countries after the ceremony, Berkowitz said, adding that an Israeli embassy in Manama could open within months.

The flurry of diplomacy between some of Washington’s key regional allies has handed Trump a key foreign policy win as he campaigns for re-election ahead of polls in November. 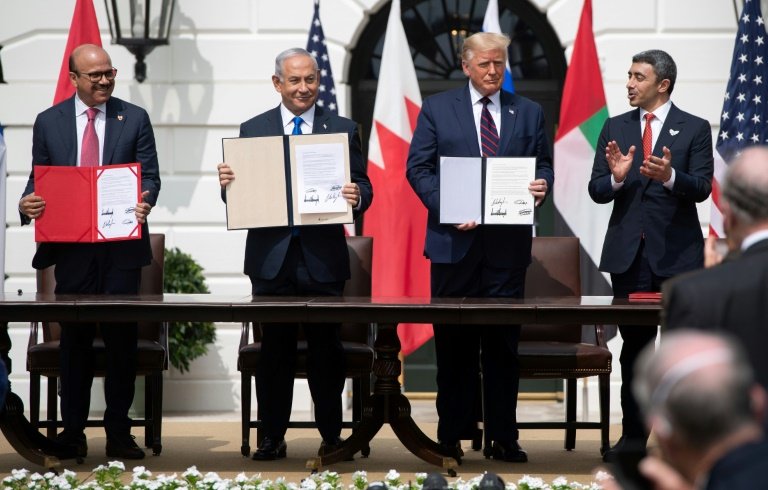 Upon arrival in Manama, Israel’s Shabbat said in Arabic it was a “great day”, adding these relations will “most likely benefit both sides”.

The Jewish state’s normalisation of ties with the UAE and Bahrain has however outraged the Palestinians, who have called the deals “a stab in the back” and urged Arab states to maintain unity against Israel.

Zayani, however, on Sunday stressed that Bahrain calls for direct negotiations between Israel and the Palestinians to end the conflict based on a two-state solution.

Like Israel, both Manama and Abu Dhabi have vehemently anti-Iran foreign policies and Tehran has slammed the normalisation.

The Gulf monarchies have broken decades of Arab consensus that there would be no relations with the Jewish state until it had made peace with the Palestinians.

Bahrain, unlike the UAE, has a history of open politics and civil society movements, although rights have been curtailed in the past decade.

In a rare display of dissent in the small oil-rich kingdom last month, dozens took to the streets in Abu-Saiba, a Shiite village near Manama, to protest the normalisation.

In the wake of the Arab Spring protests in 2011, the Sunni monarchy accused thousands of dissidents from the Shiite majority of receiving orders from Iran. 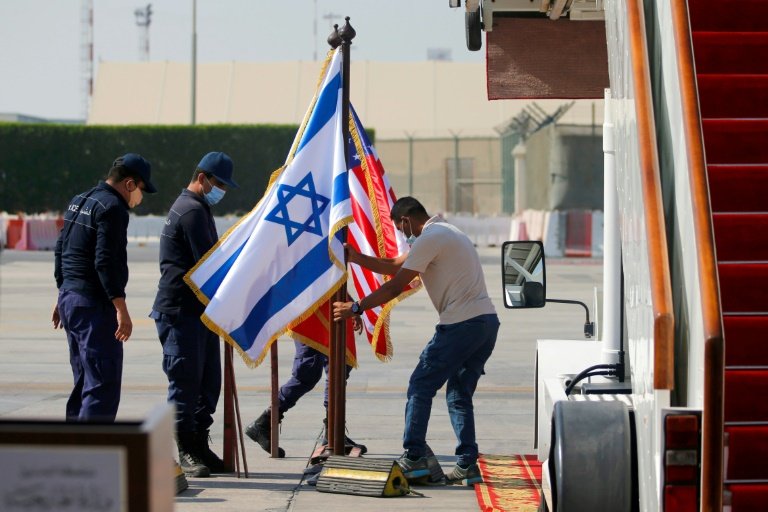 Israel’s Prime Minister Benjamin Netanyahu addressed his cabinet on Sunday, lauding what he called the “historic peace agreement” with Bahrain, and saying: “I hope that soon I’ll be able to tell you about more countries.”

Countries now value lucrative trade opportunities above positioning on the Palestinian conflict, he has argued.

The US and Israeli delegations are expected to head to Abu Dhabi from Manama to take part in a business meeting, according to the US Department of State.

Regional heavyweight Saudi Arabia has said it will not normalise ties without a resolution to the Palestinian issue despite signs of rapprochement.

But analysts have said Bahrain, heavily linked to Saudi Arabia, would not have agreed to normalise ties with Israel without Riyadh’s blessing.

Israel agreed to suspend annexation plans in the occupied West Bank in exchange for normalisation with the UAE, but has expanded settlement activity since the deal was announced.

Israel’s parliament on Thursday ratified the agreement with the UAE, and a separate vote on the Bahrain pact is expected once the details are finalised.

956 | the publication reaches you by | Bahrain News