On Wednesday (16) night in Brasília, the Declaration of the Kingdom of Bahrain, a document formed by king Hamad bin Isa Ali Khalifa reinforcing the principles of peace, freedom and faith, was launched in the presence of Brazil’s president Jair Bolsonaro and a member of the royal family, Khalid bin Khalifa Alkhalifa.

14 | the publication reaches you by | Bahrain News


The president took the opportunity to announce the preparations for the opening of a Brazilian embassy in Manama, Bahrain.

According to a press release made public by Bahrain’s embassy in Brazil, the declaration aims to promote peace between nations and a healthy coexistence between people of different religions and beliefs.

“Ignorance is the enemy of peace. Therefore, it is our duty to learn to share and live together by the principles of faith, in a spirit of love and mutual respect,” the king was quoted as saying.

The document is based on these five principles: faith and religious expression, freedom of choice, determination of God’s will, religious rights and duties, and the expression of faith.

The text was formed in 2017 by Bahrain’s king. According to the press release, the Arab country places respect for faith and other religions as an inalienable right of human beings and rejects the imposition of religious observance. 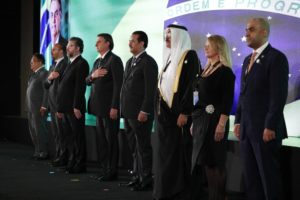 Representatives of Brazil and Bahrain

The declaration rejects terrorism, the preaching of hatred and violence by extremist clerics, the encouragement of radicalization, suicide bombings, violence, and the abuse of women and children. “Each and every individual has the freedom to practice their religion, as long as it does not harm others, respects the laws of the country and accepts spiritual and material responsibility for choices,” the document states.

The document stresses that everyone has an active role in creating an inclusive environment, which promotes mutual respect and cooperation. It argues that faith is a foundation for peace in the world. The member of Bahrain’s royal family that launched the text in Brasília is president of a delegation for peace in Bahrain, the King Hamad Global Centre for Peaceful Coexistence. 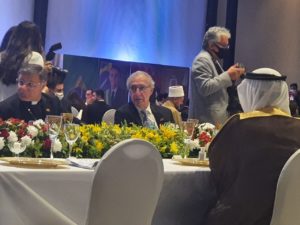 Rubens Hannun participated in the reception

The launching event took place at the Hotel Royal Tulip and brought together authorities, including Brazilian Foreign Affairs minister Ernesto Araújo; the chairman of the Foreign Relations and National Defense Committee of the Chamber of Deputies, Eduardo Bolsonaro; Tourism minister Gilson Machado; Arab Brazilian Chamber of Commerce (ABCC) president Rubens Hannun; ABCC secretary-general Tamer Mansour; and the chargé d’affaires of the Bahrain embassy in Brasília, , Bader Alhelaibi; among others.

Hannun told ANBA that Bahrain’s initiative is very adequate and shows an action towards tolerance. The choice of Brazil to launch the declaration in Latin America is symbolic, too, the ABCC’s president says. “Hosting the launch here as a representation of all Latin American countries means giving Brazil its leadership role in the region,” said Hannun.

During the event, the event, the colors of Bahrain’s flag were projected over the Christ the Redeemer statue in Rio de Janeiro, which was broadcast live in a screen at the event in Brasília. During his visit, Alkhalifa will participate in an event at the Antiochian Orthodox Church of São Jorge and in the Metropolitan Cathedral Nossa Senhora Aparecida.

When Brazil opens an embassy in Manama, as president Jair Bolsonaro announced, Brazil will have a diplomatic base in all six Gulf Cooperation Council (GCC) countries. Now, Brazil has embassies in the United Arab Emirates, Saudi Arabia, Kuwait, Qatar and Oman. The embassy in the city of Kuwait is currently responsible for Bahrain.

How smart technology can drive trade over...

Health and Safety violations in restaurants in...